We skied Kirkwood on Friday.  It was real good.  We got in line for chair 6 around 8:30am, and I think it finally opened about 10:30am.  The roads on the way in were in bad shape.  Carson Spur was closed for a few days, and Carson Pass kept closing and opening throughout the day.  Since the resort was hard to get to, it wasn't too crowded.  The picture below shows a big crowd, but that's almost everyone who was skiing that day waiting for the chair to open.  Once it opened, the crowd thinned out.  It was nuking snow all day, and so lines that were tracked were getting refilled.

One annoyance is that while we were waiting in line for "avalanche control" a film crew got to do four untracked laps.  One or two would have been reasonable, but four was excessive.  Ski patrol even said that the film crew was slowing down their operations.

After the day was over, we checked the status of Carson Pass and it was open.  But when we got there, we ended up waiting in a line of cars for 105 minutes.  Later I learned that one of my coworkers had put his Tesla into a snowbank, and that was one source of the delay.

On Saturday, we went to Powderhouse Peak.  Damn did it live up to it's name.  We did 4 laps from top to bottom for a total of 6.5k vertical feet.  It was exhausting, but the snow was so good.  I didn't take any pictures that day, because it's all glades.

On Sunday, we skied some resort + side country.  I'm going to be purposefully vague, since I don't want to blow up anyone's spot.  When we got to the resort a ski patroller noticed our gear, and asked where we were planning on skiing.  We told him what we were considering.  When I asked about wind slabs, he said that they had done a lot of blasting, but hadn't gotten any of the snow to react.  That was excellent news, and confirmed our plan.  First we did a little inbounds hike, and then we left the boundary and did some excellent chutes.

I decided to pass on Tahoe this weekend.  I might go up there mid-week to catch this upcoming storm.  A friend was in town, and Easy E has been travelling so it was good to spend the weekend together.  We did a hike by Rodeo Beach and then burgers at Joinery.  It started off very foggy, but it burned off by the time we were coming back down. 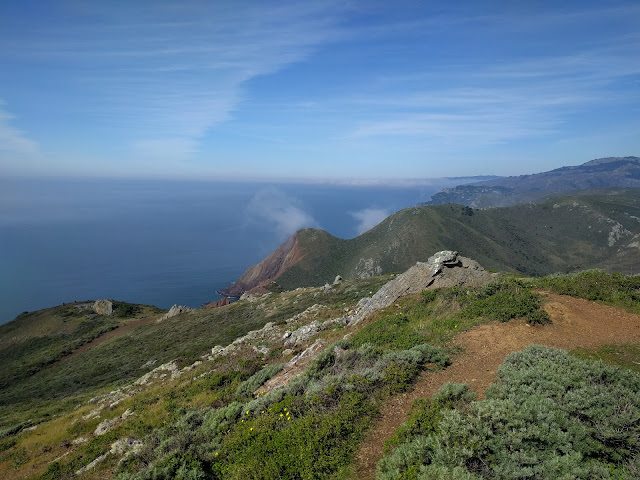 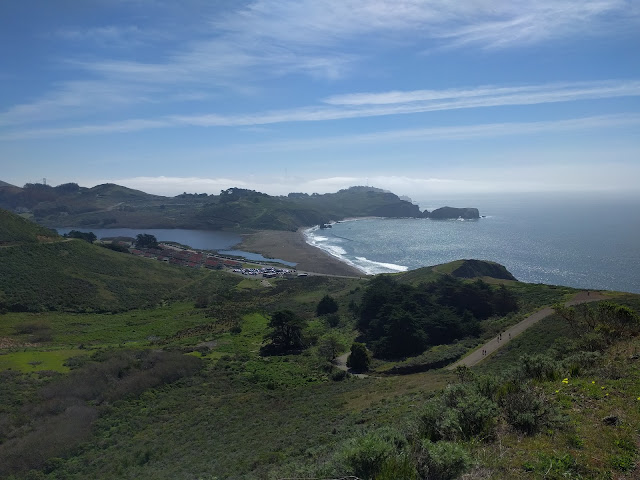 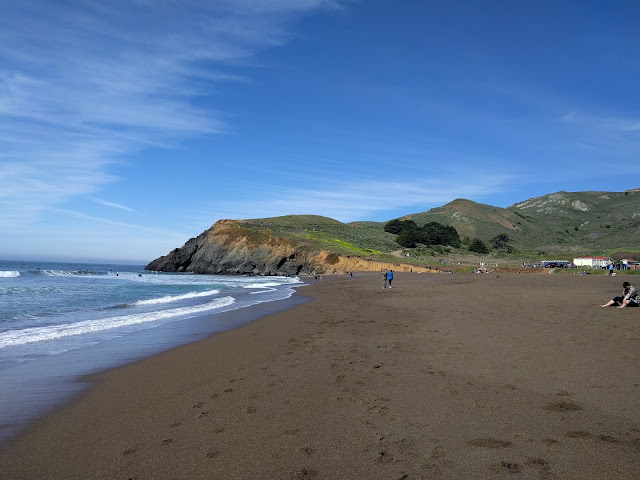 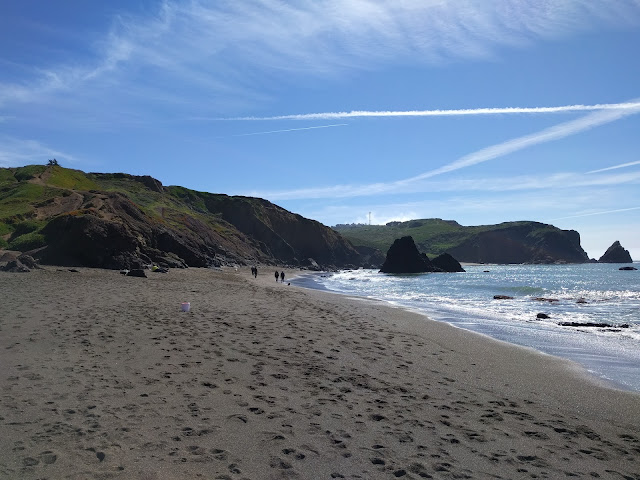 It's crazy that it took until March to finally get a big snow storm in Tahoe.  I drove up Wednesday night when the roads were still clear.  I worked remotely on Thursday, while the storm was in full swing.

On Friday, we decided to head to Kirkwood.  But Carson Pass was closed.  We waited in a line of cars for over an hour.  Eventually we heard that the pass was going to be closed for at least a few more hours for avalanche control.

After waiting for an hour, we drove to Heavenly.  Of course, we got there late and the primary parking lots were full.  Heavenly was packed, but we got some good turns in.  The coverage was spotty and we hit a lot of rocks.  But still it was worth it.

On Saturday, we skied Kirkwood.  The spur was still closed, but there was a large crowd of powder chasers there.  I got split up from my group after the first run, but I had a good time.  Plenty of good snow in the usual stash spots.  Everything opened except for the backside.


On Sunday, we skied Echo Peak.  It was great to get away from the crowds, and just have some fun.  We were able to click into our skis on the deck, and skin down the stairs.  The snow was fantastic. 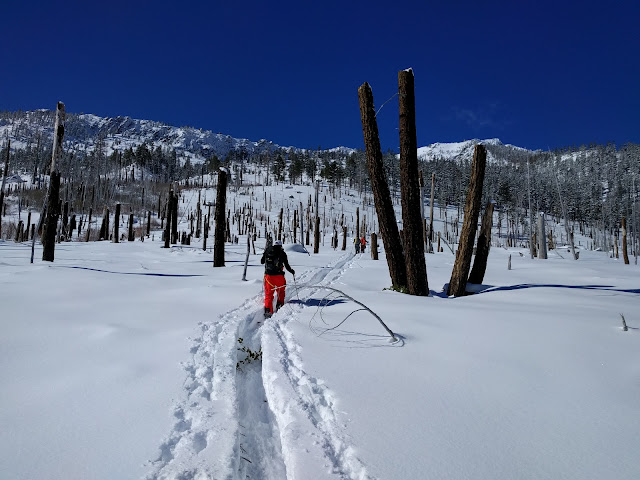 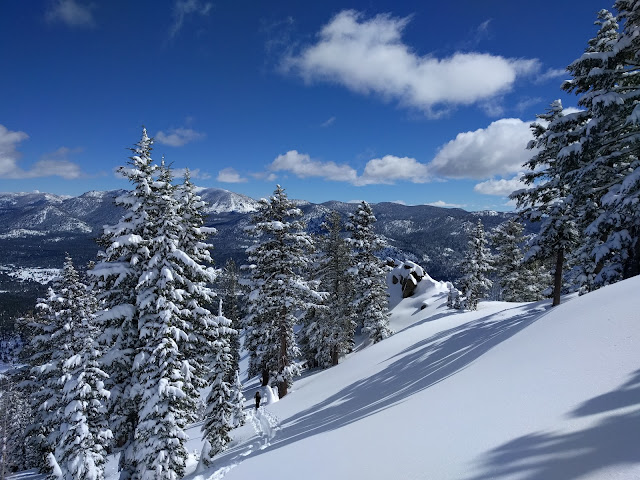 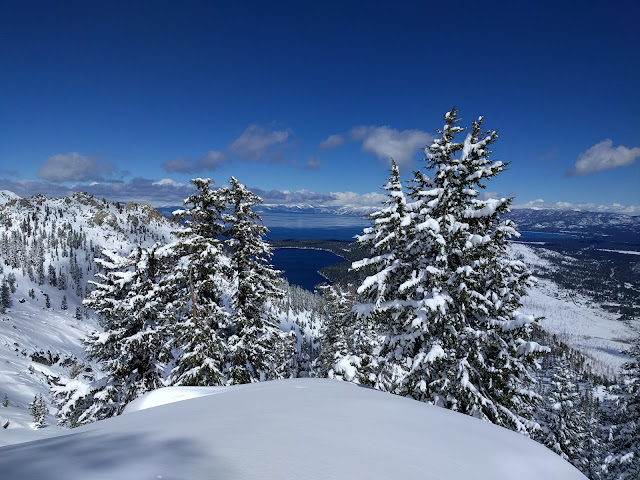