This was a fun trip.

Josh and I were drinking on a rooftop near Coit Tower at a 4th of July party.  Josh asked me if I wanted to go camping the next day.  He sold me on the fact that there is a good cliff jumping spot.  I agreed without hearing the rest of the details.

I assumed we were going to be car camping.  So I bought beer, donuts, and some random supplies.  Well when we got to the trailhead, it came up that we were backpacking.  It's a good thing I packed light, because I had to farmers carry my 12 pack of beer and sleeping bag for ~2-3 miles.

It was a pretty short and moderate hike along a fireroad, but it was super hot.  The trail runs parallel to a small river in a really deep gorge.  Eventually we came to a place to scramble down the gorge into a swimming hole. 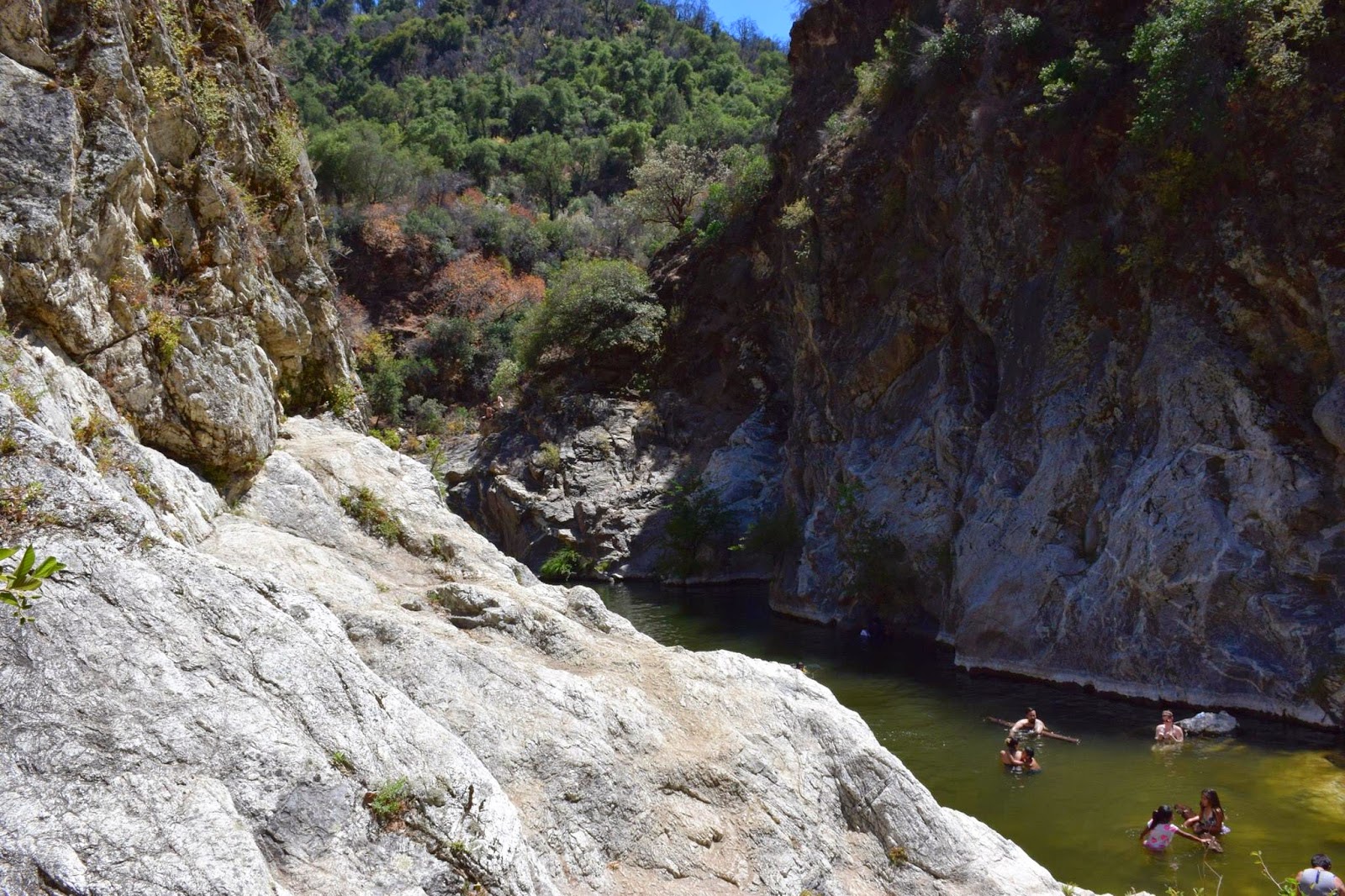 The gorge was beautiful, and the water was so refreshing.  We spent the rest of the day swimming, napping, cliff jumping, and climbing.  Just a fun and lazy day.

There is a camping spot right at the swimming hole, but there was another group already there.  There was room for us as well, but Brandon and I went to explore to see if there was anything more private.  We scrambled along rocks downriver for about 10 minutes without finding anything.  I assumed that we were out of luck, but we then found the perfect spot.  Everywhere else on the sides of the river was filled with sharp rocks, but the spot we found had a nice sandy bottom surrounded by a ring of rocks.

This new spot also had some really fun climbing a little further down river.  So we pitched camp there, made some dinner, and slept out under the stars.  The next morning I woke up before everyone else, and went for a climb down river.  The rock in the gorge was super cool.  The sides of the gorge were layered in bands of different kinds of rock.  It made the climb really interesting.  All kinds of holds.  Pinches, crimps, side pulls, friction, etc..  I went for a morning swim, and then I heard everyone else waking up.  Sound travels in a gorge.

When I heard everyone else waking up, I made my way back to camp.  We chilled for a bit, ate a little breakfast, packed up camp, and went back to the swimming hole.  Then we just repeated the activities of the previous day.  Cliff jumping, swimming, and just relaxing.


Eventually we had our fill, and decided it was time to return to civilization (and BBQ).  On the walk back, a stranger told us that it was 106° F.  I realized that none of us had even thought about the weather, since we all assumed California was just going to be nice and sunny.