A backcountry ski trip to Sol Mountain Lodge in the Monashees of British Columbia.  This will be longer than most of my posts, since it is a multi-day trip.

Flight from SF to Kelowna, BC and spent the night in Vernon.

Drove from Vernon to a golf course in Cherryville, which is used as a staging area for the helicopter ride.  We got there early, had some breakfast, and had to wait a few hours for the fog to clear.  The helicopter pilots fly the route visually, and so the path needs to clear of all fog. 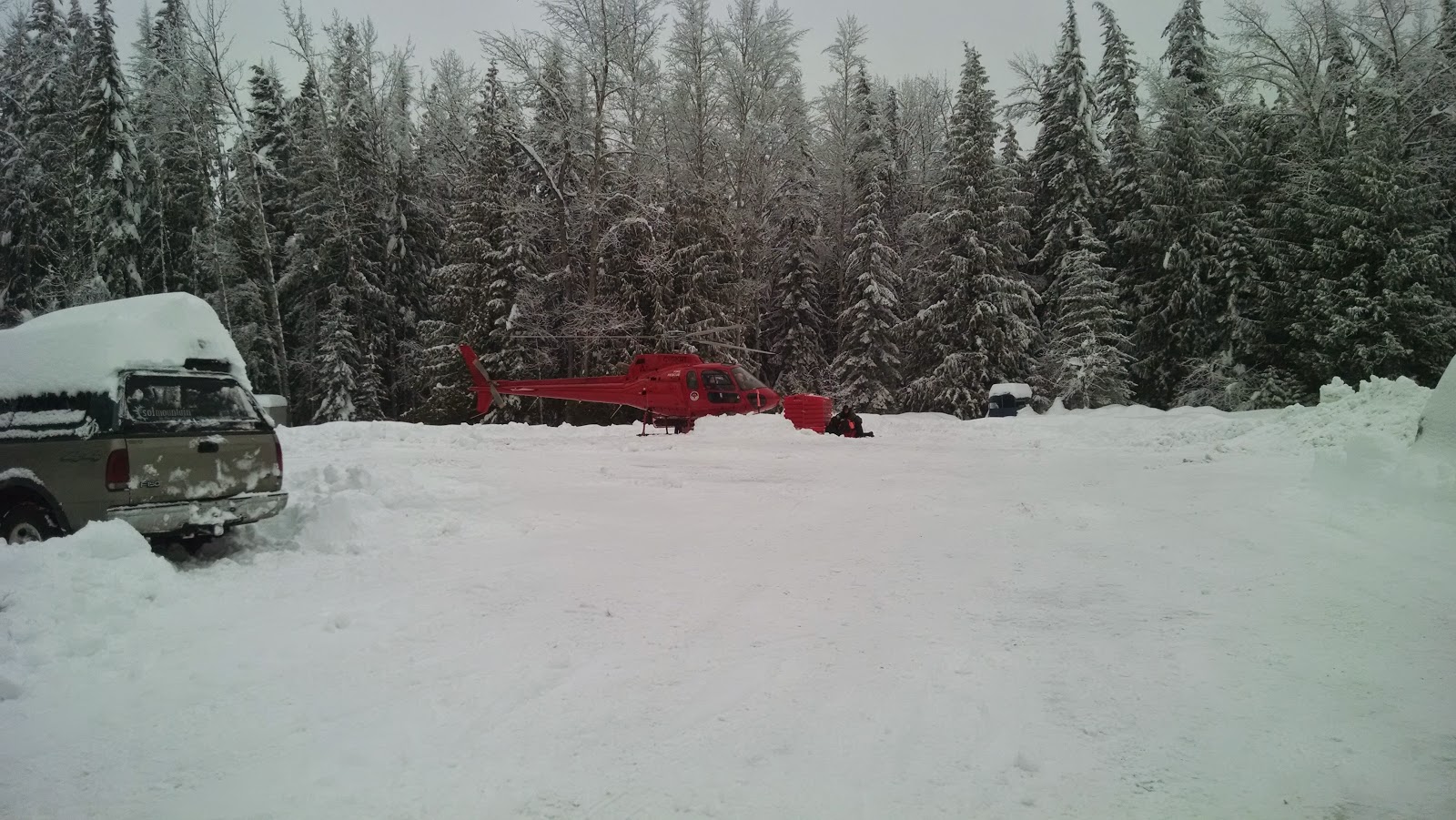 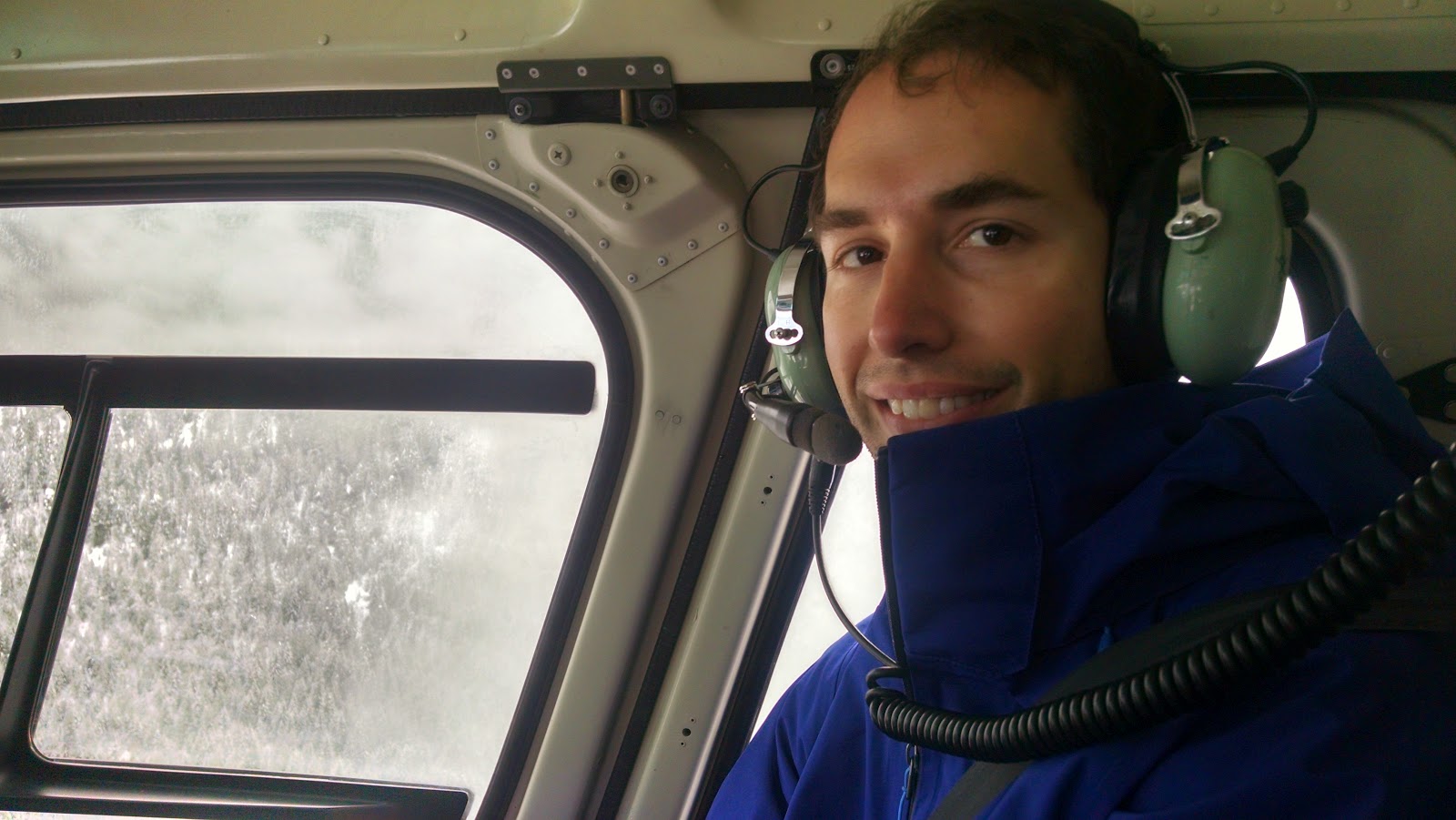 The heli ride was really cool.  I assumed that we would take off vertically to a high altitude, fly in a straight line to the lodge, and then land.  The pilot ended up following the contour of the ground very closely, and ended up banking around the ridge as it twisted and turned.  This was only my second time riding in a helicopter, so I was totally thrilled.  The views were so cool.  Fog flowing through the bottom of the valleys, and snow covered trees.

Once we landed, we immediately spotted a few slides on the ridge directly across from the lodge.  Always good to be aware of the dangers out there.  We unpacked, ate some chili, and then did a brief avalanche refresher. 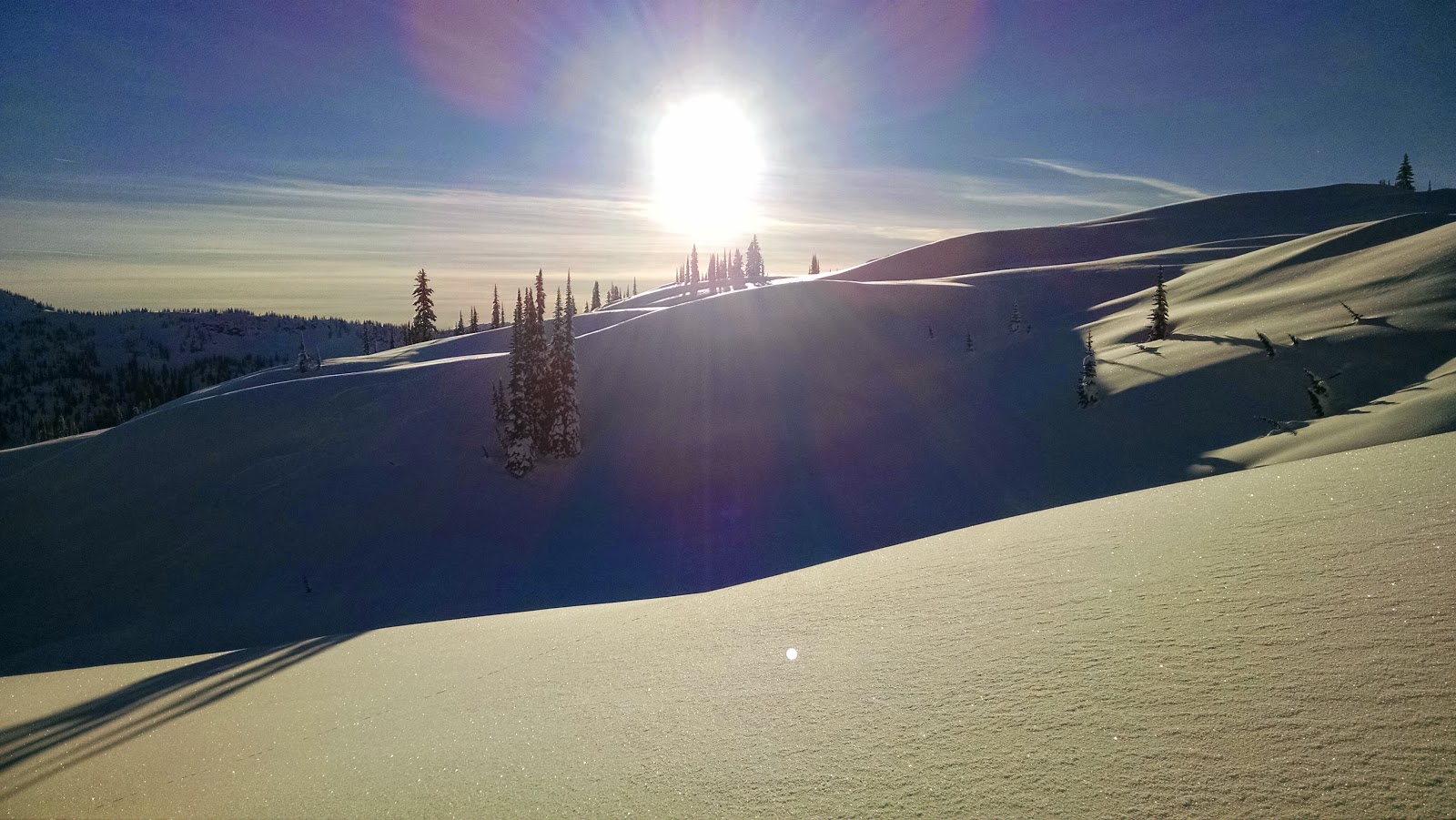 Then we (including head guide Aaron) put on our touring gear, and went for a brief tour to the summit of Mission Ridge, and skied back down by a run called Shiraz.  We hit some decent snow at the top, and then a little bit of a crust.  The sun was setting, so we didn't have time to do any more skiing.  Back to the lodge for hot cocoa, hot showers, and hot dinner.

The official start of "the program".  When I asked what "the program" was, the reply was "wake up, eat, skin, ski, sleep, repeat."  I think there needs to be some more eating in there, but you get the idea.

We(with head guide Aaron again) started skinning around 8am, and didn't come back to the lodge until 3:30pm.  My roommate exclaimed, "We got back so early!  We had time for another lap!"  I was exhausted, but I'm trying to not let it show.  I gotta keep up with the old guys. 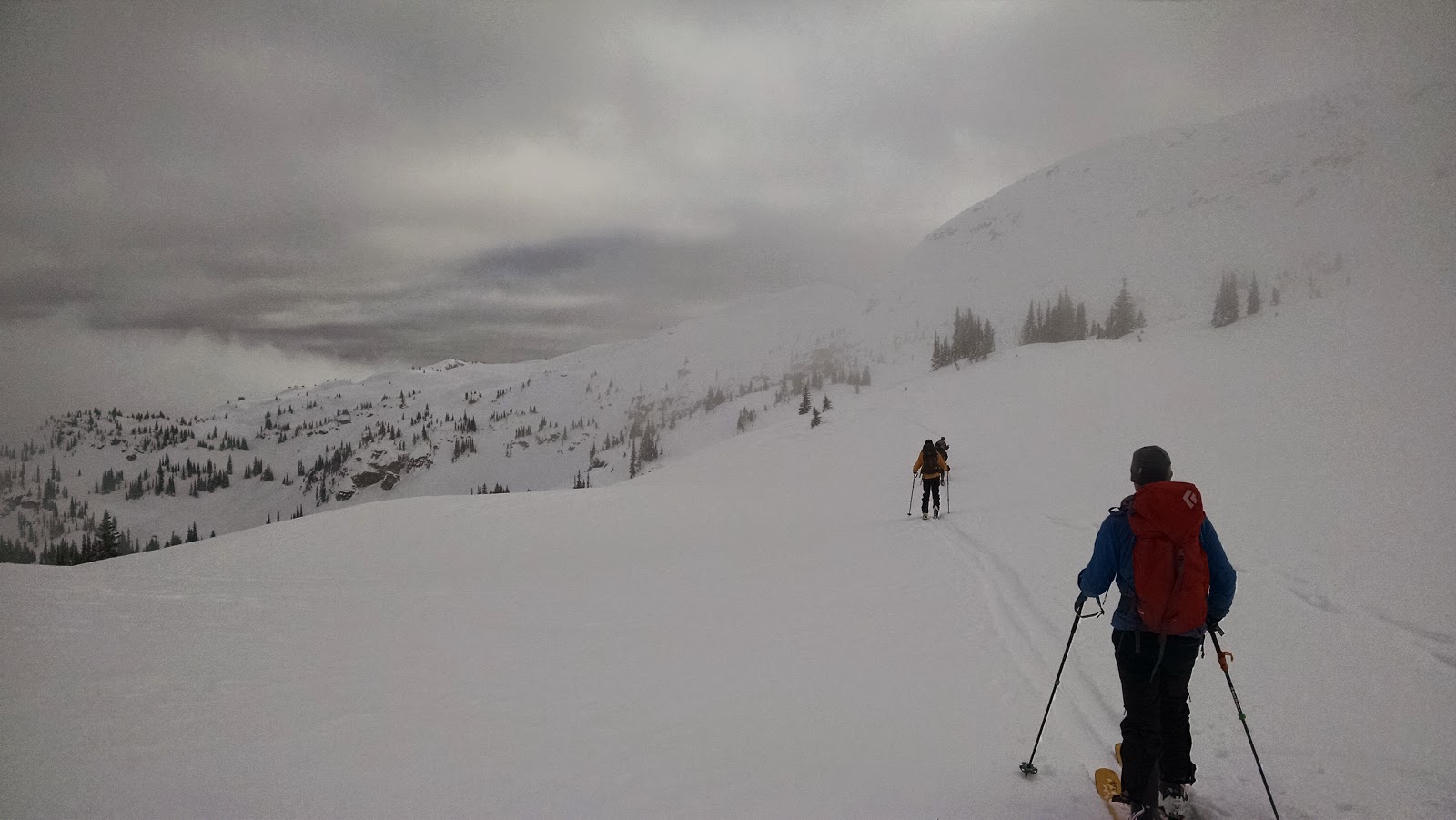 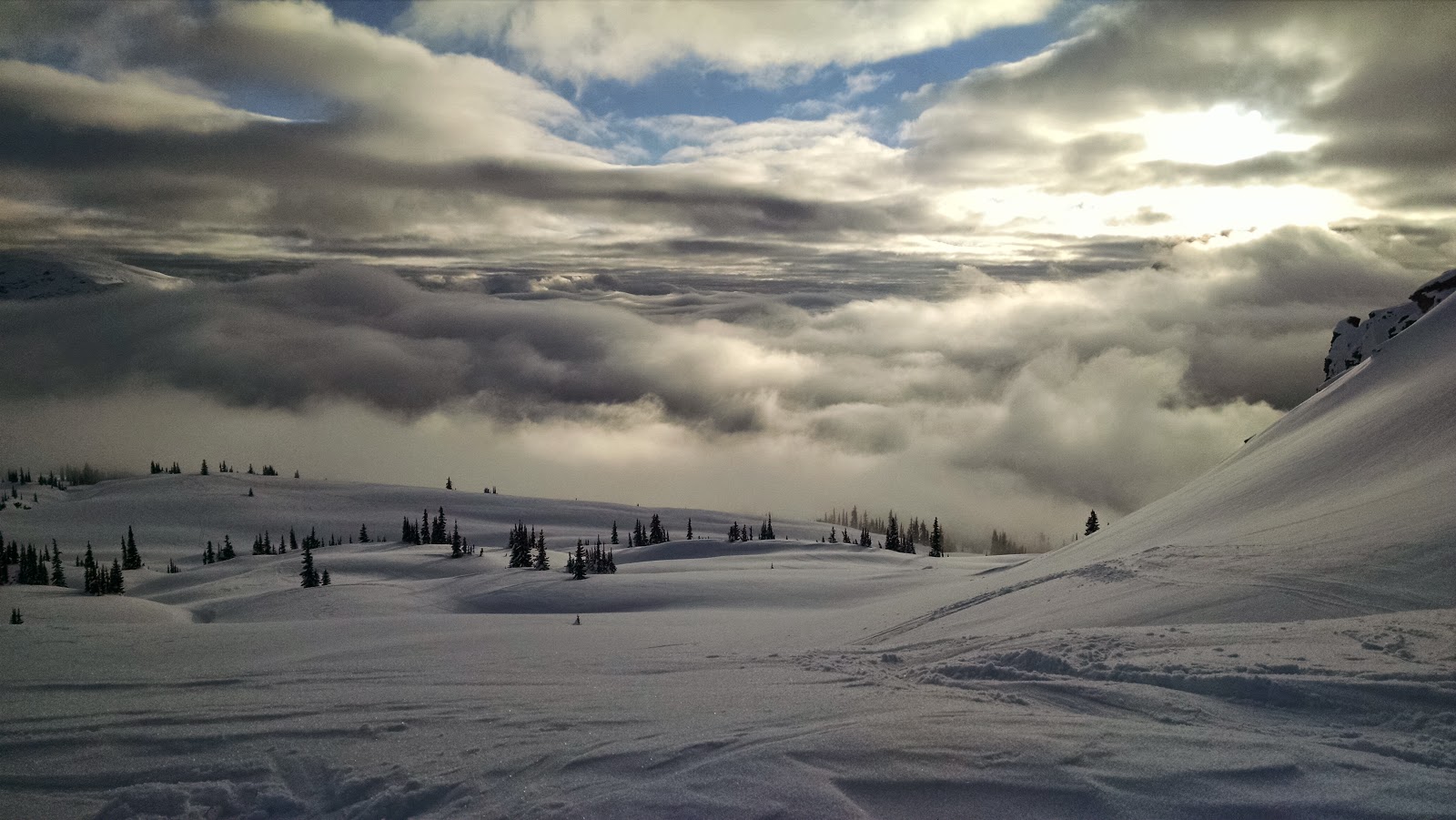 It was overcast today, so only a few good photos near the end of the day.  But we got the goods!  I got my skis into the first powder of the trip.  It was also the first time that I've ever had those particular skis in powder.  Damn they were fun.  When you put the right pressure into the turn, the skis just catch the powder, and whip out some really nice turns.  So much fun.  I've probably skied that pair for a total of 8-9 days now, and I hadn't felt that sensation before.  Anyway we had a great tour today.  I think we did about 3k vertical feet, and 7.1 miles of total distance.

On one of the powder runs, I hit a patch of ice, and my left binding pre-released.  Then I fell, which caused my right ski to release.  Ski breaks don't really function in powder.  My skis wound up in a ditch that was full of some old avalanche debris.  The guide took a picture of me in the avalanche debris, and he said that it would look like I got caught in a slide.  I need to get a hold of that picture.

After skiing, I spent some time in the sauna to loosen up.  Then we had a great dinner.  Afterwards we played my aunts' favorite card game, pounce.  Then I started writing this entry.

This was a long day, but great fun.  The most vertical feet and the most horizontal distance I've covered in a day of backcountry skiing.

We started off from the lodge for a summit attempt on Sol Mountain.  The expectation was for an overcast sky all day, but to our surprise it was beautiful and sunny.  We had a wonderful tour to the summit.  From the summit, we skied down and the snow wasn't very good.  Wind packed powder with some crust.  "Ski mountaineering" is the euphemism that was thrown around.  Our group split into two with some returning to the lodge, and some staying to take more laps elsewhere on Sol.  I stayed.  We ended up with 3 really good powder runs, before heading back to the lodge. 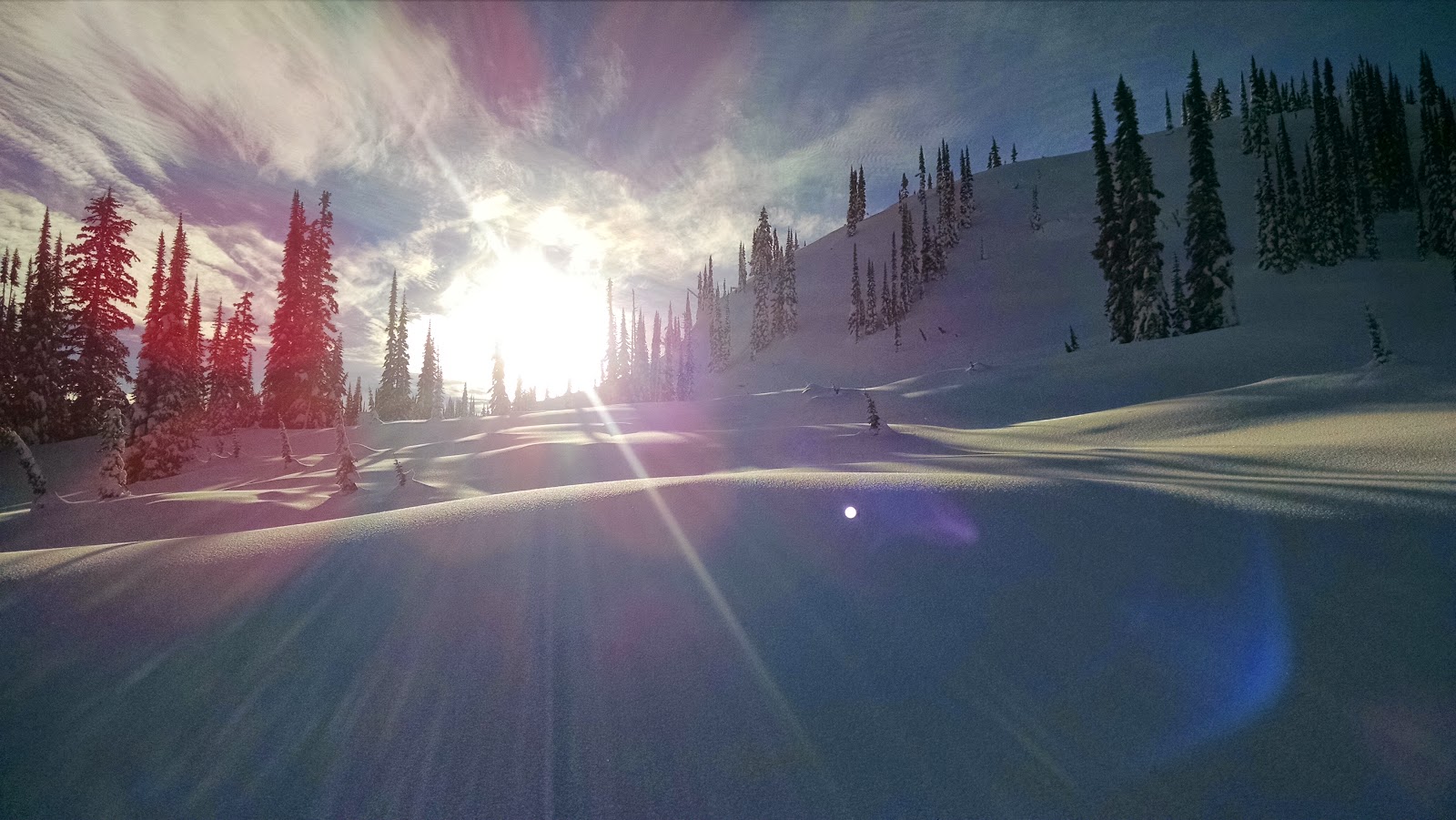 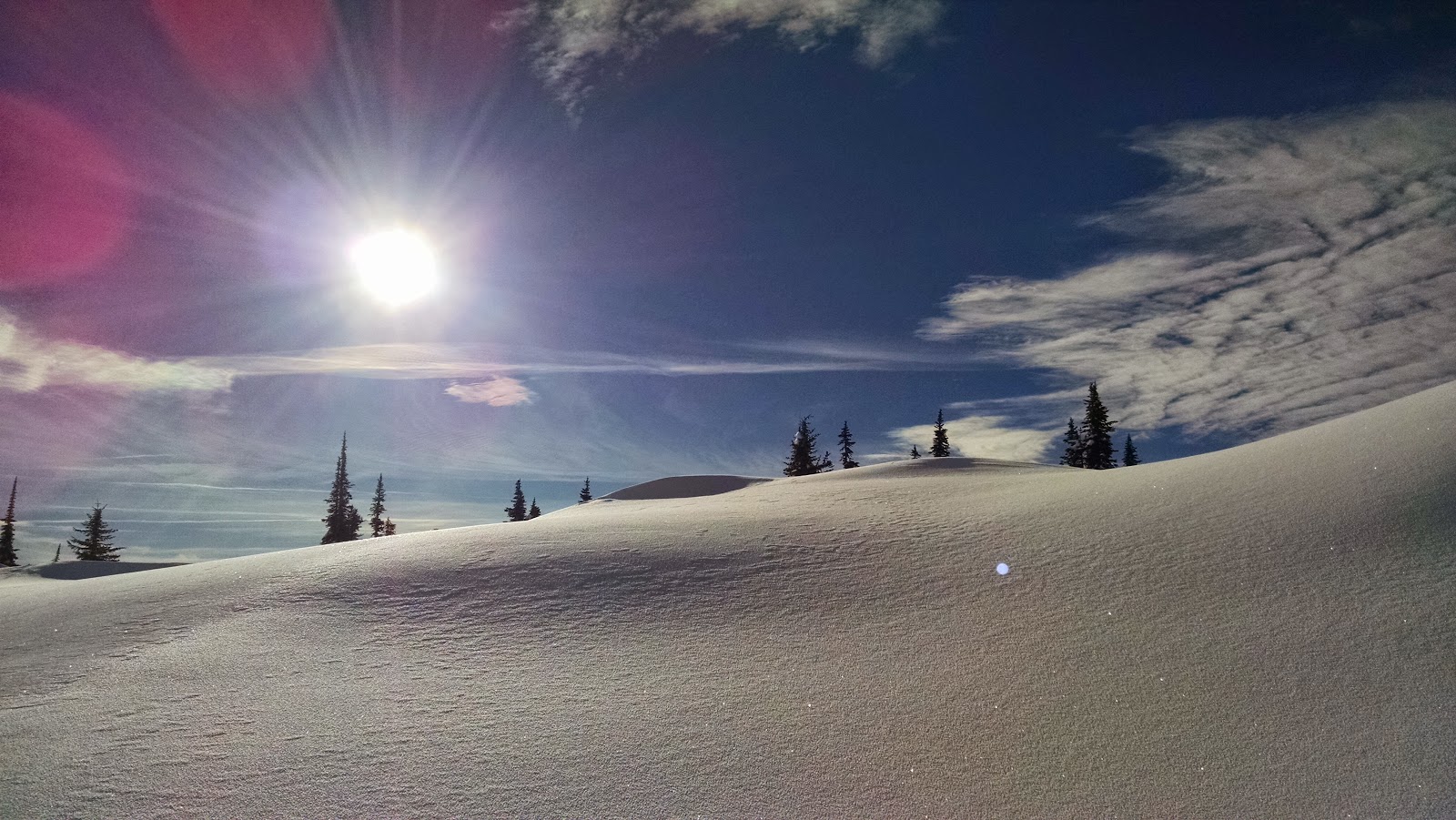 On the way back to the lodge, we had to ski down some really crusty, and bumpy terrain.  It was not great.  Then we skinned up for the hike back to the lodge.  I made it back to the lodge around dusk.  I hung up my gear to dry, crushed some apres-ski appetizers, and then headed out to the sauna to soothe my tired muscles.  Another great dinner.  Continuing "on program".

Day 5: The Pursuit of Powder

Everyone split into two groups this morning.  The A team was headed to summit the tallest peak in the area, Mt Fausthell(check spelling).  The other team was heading out in search of lingering powder on northern facing slopes.  Since I had done some ski mountaineering the day before, and wasn't all that eager to climb all day to ski wind-blown and sun-baked south facing slopes, I chose the powder squad. 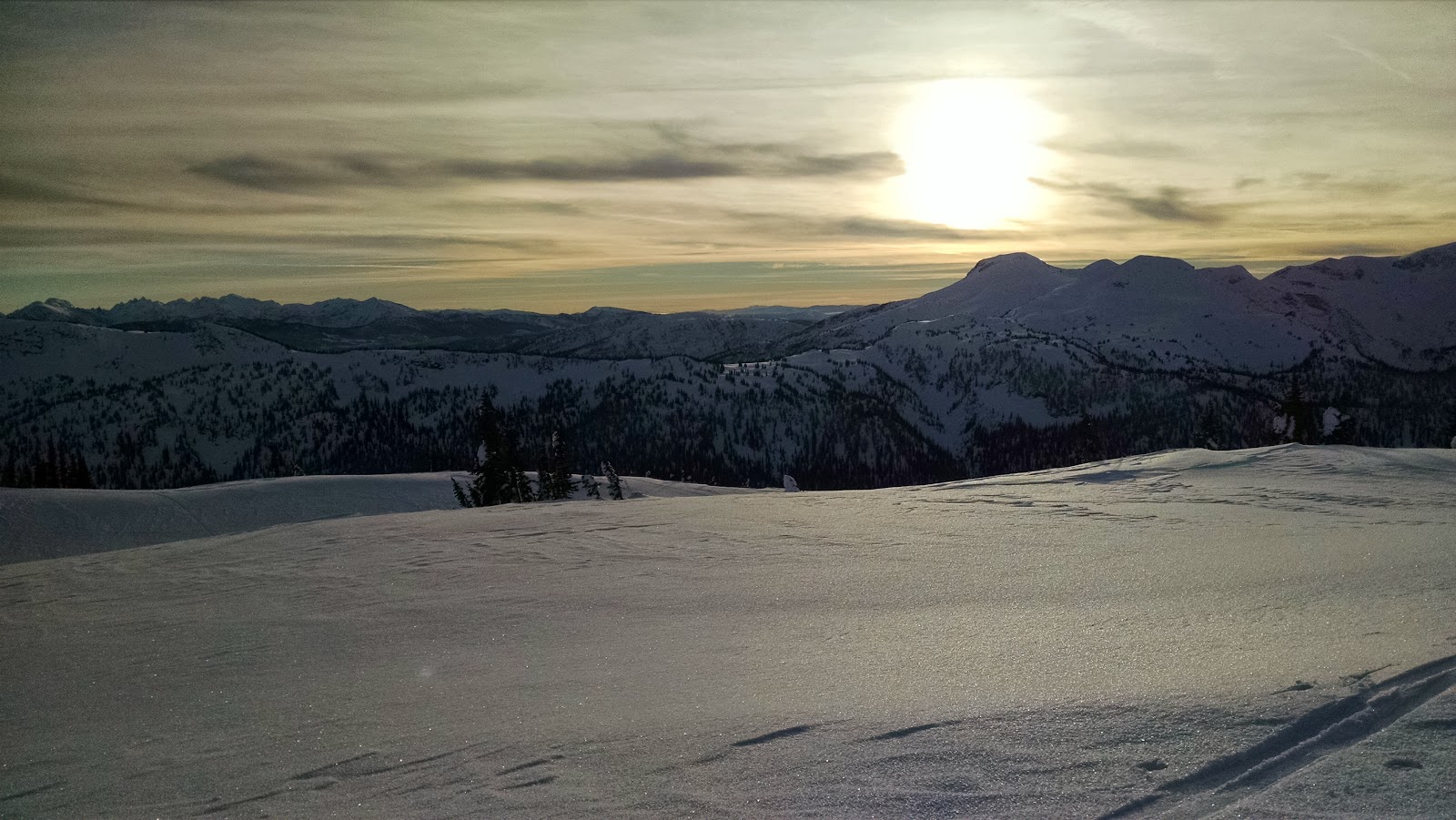 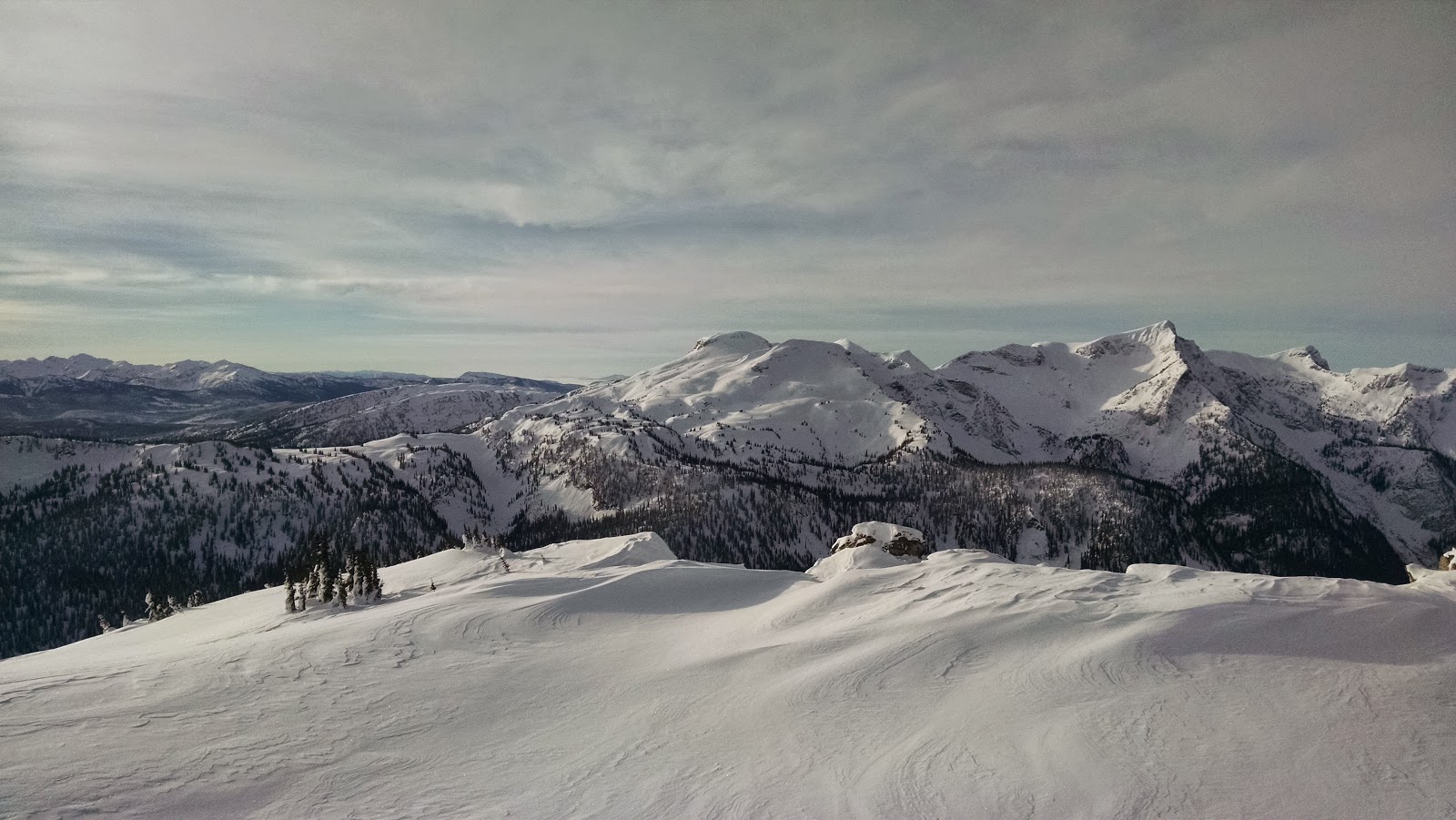 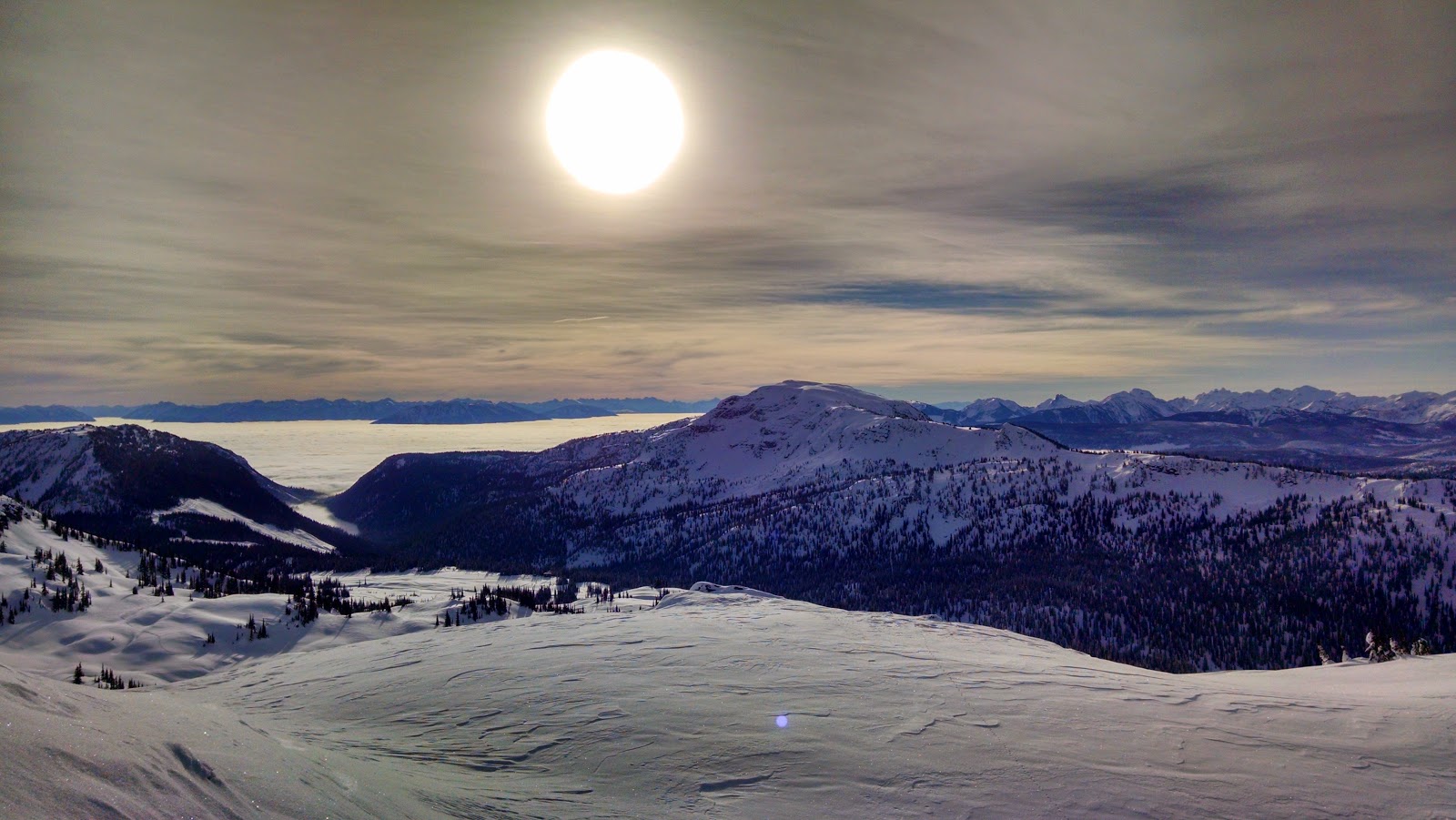 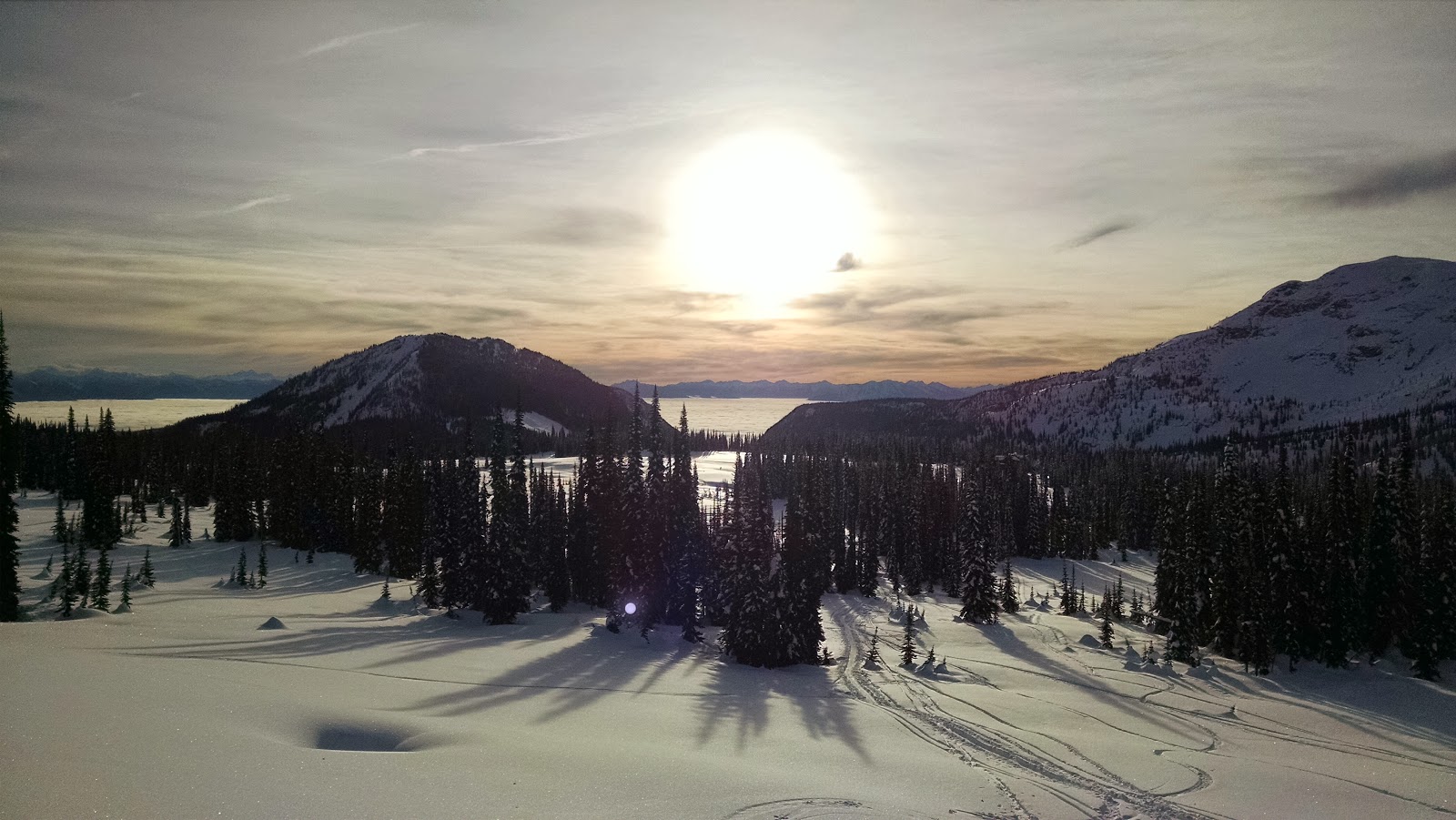 The powder troops found the good stuff.  The guides know exactly where to go to find the good stuff.  The weather had been really weird lately, some kind of temperature inversion.  And also some rain.  So the good snow was in a certain elevation belt, in certain north facing slopes.  Very particular.  But it was there, and we skied it.  My favorite run was a chute in that area.  Normally the guide skis it first, but he let me have first tracks on that one.  We ended up skiing it again a few runs later, and it was still just as fun.  Steep terrain and fast snow.

This was my birthday, and so the group kept nominating me to take first tracks.  Woohoo! 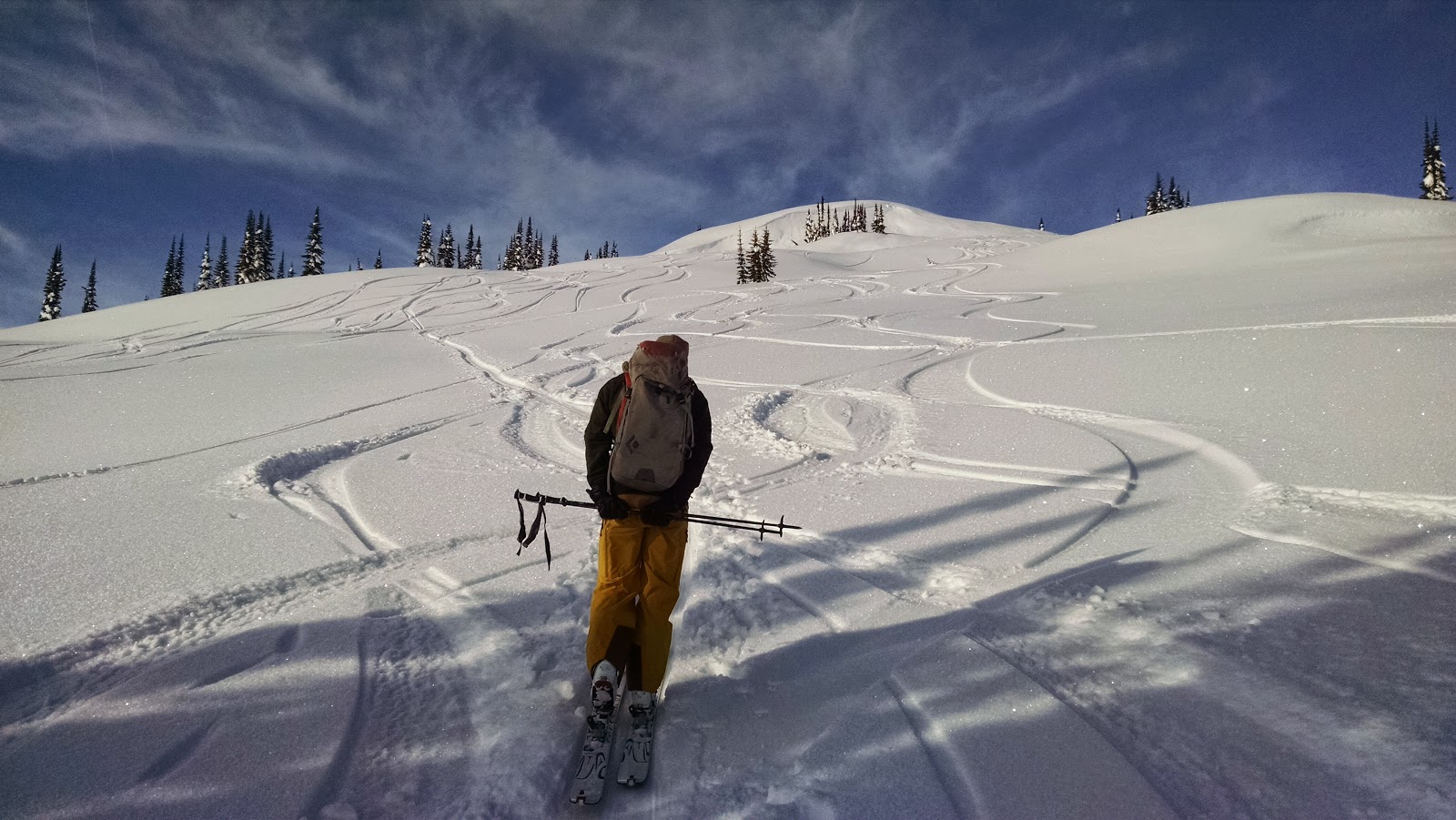 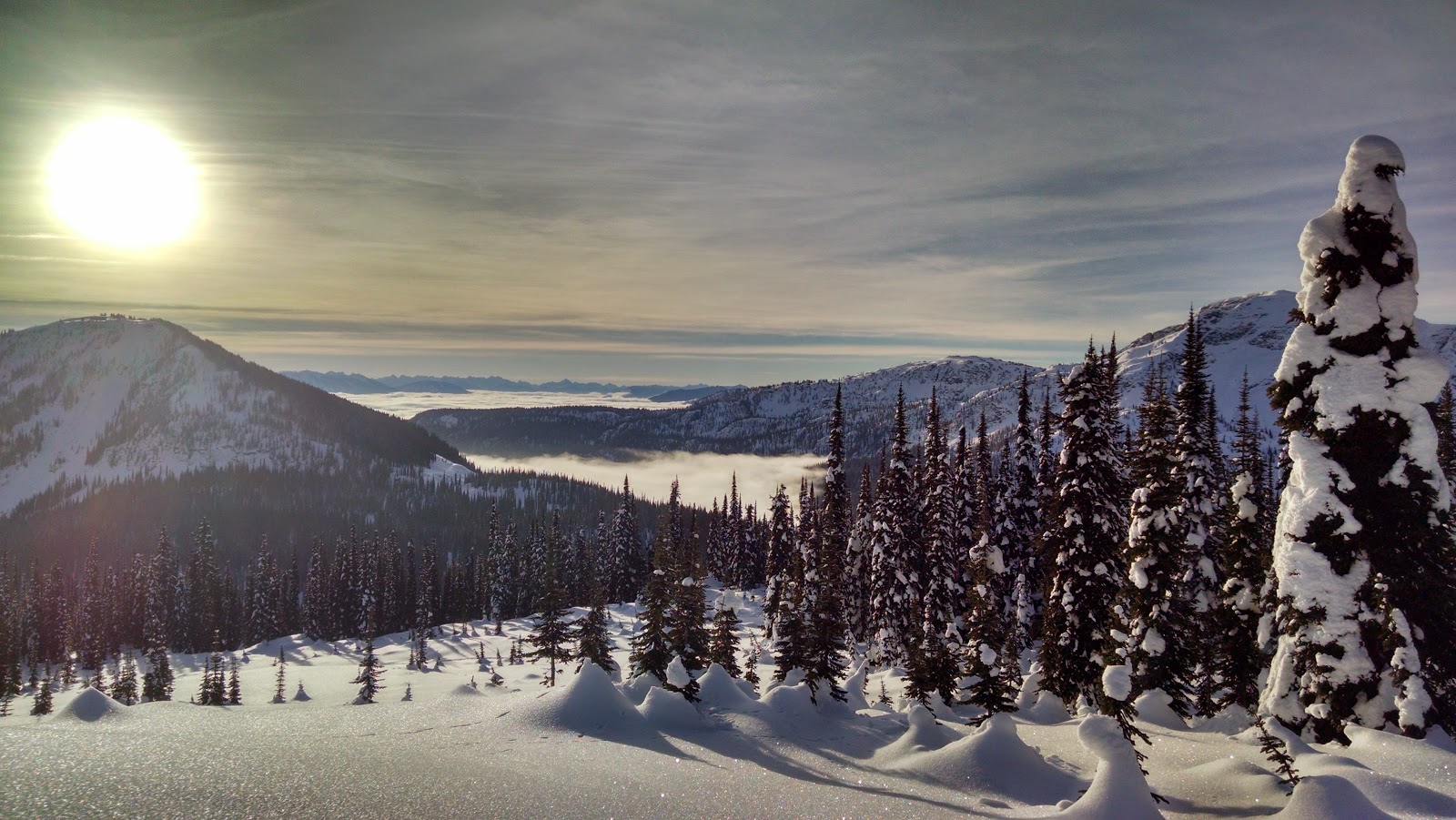 Day 7: Return to San Francisco
Since it was my birthday on the previous day, I was nominated to ride shotgun in the heli on the way back.  The rest was really uneventful, just a car ride to the airport, and a flight back to SF.

Recap
Going into this trip, I was really worried about my gear choices.  The helicopter can only hold so much weight, so you have to make some choices ahead of time.  Last year I tried to ease into backcountry skiing in a cheap fashion.  I mounted Marker F10 Tours onto my existing powder ski, which is an Armada JJ.  Combined with alpine ski boots, this is a heavy setup.  This summer, a friend from work gave me a great deal on a pair of G3 Tonics with tech bindings and skins.

Anyway I brought the lighter setup, and one of the other members of the group had an almost identical kit to my heavy setup.  She had the women's' version of the JJs, and F12 bindings.  She was tough, and she didn't complain about the weight.  Seeing her on that setup made me thankful to have some really great lightweight gear, and some excellent fitting boots.

Anyway this was a great trip, and I would love to do it again next year.  Probably the best ski trip that I've ever been on.